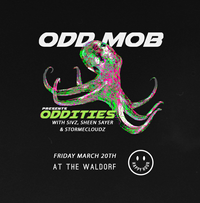 Odd Mob is the recent solo project fronted by Brisbane-based Harry Hope, who developed a knack for identifying unique sounds through the local club scene. Since breaking through with the ubiquitous track ‘Is It A Banger’, Odd Mob has showed no signs of slowing down.

With each new release he has dominated the ARIA Club Chart – with a highlight being ‘Into You ft. Starley’ becoming the highest performing track of 2016 – holding the top position for 7 weeks straight! From remakes, vocal tracks, remixes, and right through to his original productions, Odd Mob has a reputation for creating freshest genre-defying catalogue.